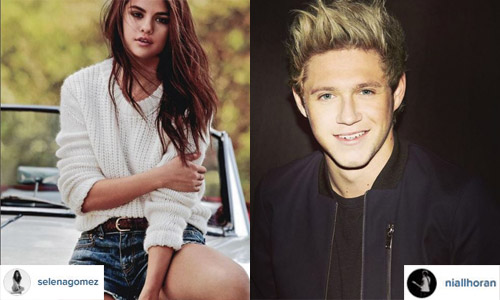 Tough luck, JB- your ex might have took another direction.
Selena Gomez has been seen out and about with One Direction's Niall Horan along with a few other really attractive guys, but she has once again gone back to Justin Bieber. Or so it seems. Over the past few weeks, video footage surfaced of him serenading her in a hotel.
While the possibility of Justin Bieber and Selena Gomez getting back together gave everyone with a broken heart a spark of hope, there are new rumors that Gomez might be indeed after all giving Horan a shot. This news comes days after Gomez and Bieber were spotted hanging out at a bar in Beverly Hills together. The Same Old Love singer has made it clear that she is single at the moment but is definitely on the market.
There is no smoke without fire and the new rumors might have started as a casual talk between some and have now become a major grapevine. Over the course of the Gomez-Horan uproar both US Weekly and TMZ stress that the two are just friends as they were seen together with other friends at Nobu Malibu.
Bieber also further explains to US Weekly about the two not being an item yet again, “She’s my homey. We don’t talk every day. But every now and then, she hits my phone up.” So that could maybe explain why the two were strolling together few days ago and why they were huddled together at Selena’s dressing room during the AMAs. This leads to confusion because over the course of both their album’s press launches for the past two months, both parties have been talking about each other and how they are still not over each other.
Selena and Niall sparking rumors however have apparently been going on and off for years as the two can be seen together whenever Selena and JB supposedly call it quits. But let’s give these kids a break- both stars are enjoying the peak of their careers while Horan is still caught up with 1D’s massive success.
#y101 #alwaysfirst #celebritybuzz
Twitter