The hottest British pop-rock male band has reached our shores.

Last Sunday before their show at the Robinsons Place Galleria, Y101 had the chance to interview The Vamps during their press conference held at the Marco Polo Plaza Cebu. The hit makers behind the hit Wake Up comprises Brad Simpson on lead vocals and guitar, James McVey as the lead guitarist and back-up vocalist, Connor Ball as the band’s bassist and Tristan Evans on drums. Unfortunately, Ball wasn’t able to join the group as he was suffering from a knee injury which happened during a gig at Hong Kong and was advised to see a physician at the UK. But all is well as the band expressed having a good time here in the Philippines for the second time around. 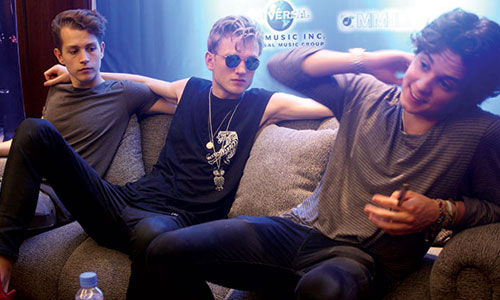 They even said that they have the loudest fans here as their fans are more dedicated. What made them decide to stop by was the fact that their Facebook page analytics indicated that the Philippines ranked 2nd in terms of where the most of their fan base came from. “… We have that statistic thing that shows you where the fans are in all the world and number two is the Philippines. We didn’t know much about the Philippines before we formed the band, and then we’ve learned so much because of the fans. And we’ve learned so much because of the gig here that was our favorite gig to date. It was amazing to tap all the fans. It was really enjoyable to come to and the fans are great,” McVey explains.

For some time, the band has been compared to One Direction and although they feel flattered to be compared to the world-famous boy band, they still feel that their respective sound and over all feel is different. “They’re a really big band so it’s nice to be compared to someone that successful, but I think we’re very different in terms of the flavor of the bands. I think people can like whatever they like then actually draw a comparison, so we’re just gonna do our thing in hopes that the people are enjoying that,” said Simpson. Things are also going pretty well for the boys especially with their contribution to the Kung Fu Panda OST and their upcoming tours. This 2016, they hope to travel more and hopefully start on their next studio album.