The Best of Badian

Bring out the daredevil in you!

I just came from a long trip from the south and one of our stops was at Badian, which is an hour and a half car ride from the town proper of Carcar. Do you know that feeling when it's burning hot and you can't help but imagine that Sprite commercial back in the day come to life? You jump in and drink in all the refreshing Sprite your lungs would allow you to. But that would be too expensive and we have more ways to freshen up. 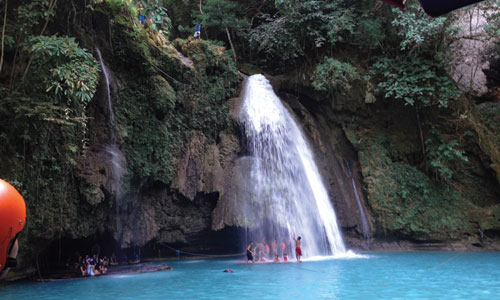 When it comes to Badian, it's a no-brainer on where to go. So if you're a true-blue Cebuano, yep, you've guessed it. We took a refreshing swim at Kawasan Falls! The long drive under the heat (yes, even if we were inside the car we could feel the unforgiving heat) was pretty worth it as you can just savor every inch of coolness on your skin. Forgive me for being a bit poetic, but trust me, it's worth a stop by! The falls has three levels and it's a good spot for those who like to practice and show off their jumping skills. And yes, Kawasan Falls also offer a canyoneering adventure package for big groups that like to explore! Which brings us to our next stop, the...

Unknown to several people (myself included), Badian is an extreme sports enthusiast's haven! The third station of Kawasan falls is an entry point to the famous upstream canyoneering activities that the municipality has to offer. There are two ways to go about canyoneering in Matutinao river, you can either do it upstream which traverses Kawasan Falls going against the current up to the rivers of Alegria or downstream that commences from Kanlaob river in Alegria going down to end in Kawasan Falls. According to tourists, you'll see unique rock formations and vegetation lush and varied. An occasional monkey, monitor lizard, butterfly, birds, and other life forms!

Pescador Island is every diver’s dream, with its easy access from the shore and wide range of dive sites from shallow to deep dives. It is also a fantastic place to go snorkeling too! An easy way is through the Badian Island Resort as this is the nearest entry point to go. The waters’ visibility here is usually very clear and you can enjoy the beautiful corals that are abundant in the area. It has a plateau that surrounds the island. On the northeast side of the reef plateau one can find several large rocks and coral heads that majestically reach the surface. The reef plateau slopes down to around 8–10 meters where it then drops vertically into the abyss. It is a wall dive with overhangs and small caverns and holes in the reef wall where one can enter and exit. Colorful acropora and stony hard corals are seen on the upper plateau.