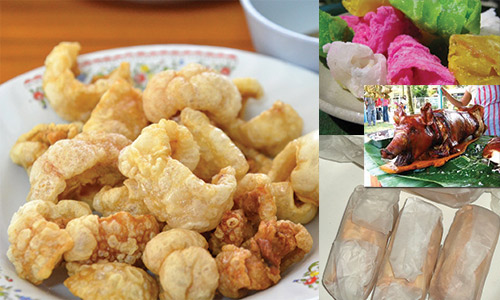 Make this an important stop when you're heading south!

Carcar has been famed for its shoe industry but what makes the municipality one of the best is the fact that it's the undisputed food district of the south. Carcar isn't just fames for its chicharon, mind you. The real magic's at the center of it all, the Public Market.

The first part of the market consists of fresh produce and an array of merchants selling their Pinoy-style hotcakes, budbud, bibinka, casava barbecue, deep-fried bananas and delicacies such as ampao, chicharon and bocarillo. Ampao is the Pinoy version of a rice crispy bar and bocarillo is candied coconut strips with shades of pink, yellow, green and white. You can find different vendors roving around but you get to compare prices at the market so better take your time and grab a snack while you're at it!

Along the way inside, you can find different sari-sari stalls and a bakery that has been a favorite stop-over for decades. You can score great household items too and try some footwear currently available for the season.

If you're planning to cook or grill food for your outing, several vendors sell fresh meat and poultry as well as other meat products such as chorizo and sausages.

Carcar is loved for their juicy and succulent lechon. Probably the best you'll ever taste. Period. There's no point in arguing to that fact. Different vendors will try to woo you into buying from their stalls and offer a sample taste of crunchy skin or juicy meat. Buy a piece of puso too while you're at it to have a light meal before heading further into your trip.

Of Course, several carenderyas are also ready to serve hungry guests. Feast into classic Pinoy dishes such as menudo, larang or balbacua.

Guso, lato, piniritong isda, kinilo nga buwad...all these in a sentence are enough to make your mouth water. Be sure that you're buying fresh guso or lato since eating from a batch that has been exposed to air for a long time won't taste and look appealing.

Have you been to the Carcar Public Market? What's your favorite delicacy?