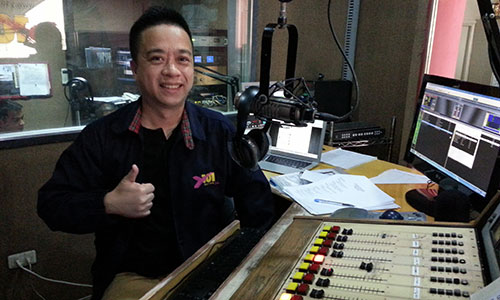 It’s not a common situation that you see someone actually living their childhood dream.

Majority would find another passion along the road of growing up, or unfortunately for some, they concede.

Michael Solon is the kind of individual who is systematically motivated, iron-willed and ridiculously impartial. I am not sugar-coating just because this person can have my head on a chopping block at any time of the day, but I can genuinely say that those words hold true to the man that he is. It isn’t much of a surprise that he is exactly where he wants to be at this point of time: heading the company that he has desired for so long, and that’s the very radio station that you’re reading this article on. Wish me the best of luck while I tread on this write up carefully.

At the age of 10, Mike already had his mind set on a goal. He already had his ears glued to Y101 before some of us could even breathe in our very first waft of the earth’s oxygen. A DJ was what he wanted to be – a DJ in the radio station he listened to religiously. In the long run, that became part of his personal disposition. It set him apart from the kids then (and now) who would usually say they want to be a doctor, and then change their minds and decide on a life-threatening choice to become a Stormtrooper the next day. It could be the reason why, out of everybody else, Mike is the only person who can grasp the identity of Y101 as a brand, as a community, and even as a family. I think by now you could say that he isn’t one who gives up easily.

Mike had his first audition in 1996. He was accepted after the second try out and finally became a professional DJ at the age of 24. But he didn’t stop there. The hard work this man has put into this radio station is without compare. From practically doing everything himself without complaints, even if he had to show up late at night just to please listeners, to waking up early to come in as a sales executive and then staying as late as 4am to produce a radio ad, is beyond anything I can imagine. I don’t speak for everyone, but I can hardly get out of bed in the morning. His commitment eventually paid off when he was appointed station manager at the age of 29. Most of you would say that that was it, and that he had gotten what he wanted. Yes, I think he thought that too. But I don’t think he knew then about what he has achieved now. Of course he didn’t. Let’s not add ‘fortune teller’ in his resume. That would be a little dangerous. We can safely say that it “exceeded his expectations” though.

Michael Solon is now the premier entity of Y101; administering the radio station as its president. He runs the company not by following every standard procedure, but by considering and ingesting the personality of the station. The responsibility to take Y101 into greater heights is what he values highly. According to Mike, dedication and loyalty are some of the qualities you have to possess when it comes to doing your job. “If you love your work then it doesn’t become work,” he says calmly. His work ethics are highly advised and a must-do for anyone who really would want to go for what they aspire most.

This media overlord can shoot anything, anytime and won’t fail to land on target. He isn’t the Lord of media supremacy and Prince of radio broadcast for nothing. This hitman, sometimes, does feel like a plastic bag though, but only in the confines of his own tank.