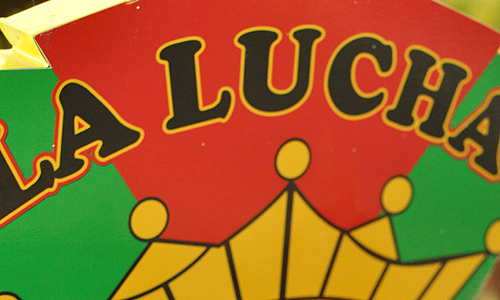 Today’s generation is more adventurous than the preceding, especially when it comes to food.

Palates have been opened and the search for flavours that are sui generis is on. Can we finally kill the stereotypical “All you have to do is make it sweet and Filipinos will like it” assumption, and finally be able to open our arms to welcome authentic cuisine from all over the globe?

La Lucha/La Lagrima Taqueria is living proof that the conservative demand for flavour is slowly dying. George, restaurant owner and cook of this amazing joint, expresses that he keeps everything as is, and made no adjustments to satisfy the Filipino palate.

He was born and raised in California with a bloodline that can be traced all the way to Oaxaca, Mexico. George started to cook when he was thirteen years old. When I asked him what his specialty dish was, he jokingly answered, “Grilled cheese sandwiches” while trying to keep a straight face. Today, his skills in the kitchen have definitely outgrown the teenager’s culinary cheese on toast masterpiece. His family used to own a seafood restaurant for ten years, but they have now focused on taquerias which have been going on for about seventeen years now. It’s not a surprise that George ventured into the same line of business. His ability in the kitchen covers a wide array of food; from seafood, platters like enchiladas, to ethnic dishes.

It makes you wonder why someone who possessed an undying love for his own culture would go all the way around the world just to put up his own business. Before he decided the big move, he told me that he did consider his homeland thus conducting his own research which resulted to him flying to Mexico. He stayed with his family for a month, and met up with an uncle who runs a big construction company. That same relative worked alongside the government that gave George the opportunity to travel all over the state, including the sierras. He recalled how the mountains were special because of the psychedelic mushrooms that grew immensely on the peaks. The French scientists – including The Beatles – frequented the highlands due to this special fungus that flourished in the famous alps of Oaxaca. He genuinely wanted to invest in Mexico, but something prevented him from doing so.

“I’m too afraid over there,” said George candidly, lowering his voice just a tad. “If your business does well, they ask for percentage – ransom. I didn’t want to risk it; definitely not Mexico.”

So his search for the perfect place continued. Where could he possibly go that had something in common with Mexico? That’s when he came across the Philippines. It was like spinning the globe and pointing his finger on it. He recalled saying “Why not?” Although he admits that it wasn’t very easy, since he isn’t from the Philippines after all, he certainly has no regrets. He packed up, left, and brought his Mexi-Cali wonders all the way to Cebu.

What is Mexi-Cali anyway? California has a mix of different dishes all over Mexico, and Mexico has different specialties according to different regions, George explains. For example, Carnitas are from Michoacán. In Oaxaca, they’re not very good at it, and in Jalisco, they’ve got a rice drink called Horchata. It’s basically different things that are blended together into one Taqueria (taco shop). He was pretty excited when he talked about opening in Banilad, since his spot at Mango Square didn’t prove to be accessible enough for his clientele up north.

George told me people usually ask him to come up with certain dishes, or they tell him to adjust recipes in his existing ones. He calmly said, “My mother always told me ‘you go to a restaurant to experience something different’. If you have too many requests, open your own place.” Then he added, “Lahi ra.” (It’s really different.) Surprised, I asked him if he knew more phrases in Cebuano, to which he humbly replied “Gamay; I’m still learning.” (A little; I’m still learning.)

Give George a visit the next time you crave for an excellent burrito or amazing Carnitas that are so tender it can make a grown man cry. But if you still are confused on what to get, check out George’s top recommendations: www.y101fm.com/features/lifestyle/cebu-s-best/7640-la-lucha-la-lagrima-taqueria