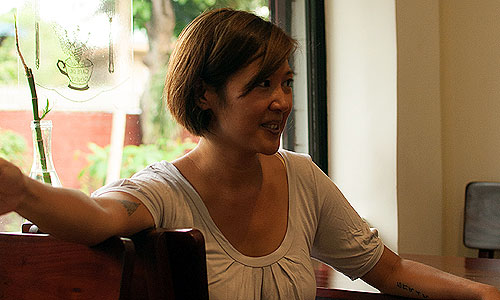 Living in Paris is a dream a lot of women work on. But for Windy Gancayco, it was her reality.

She was only six years old when she stepped foot in the city of blinding lights. Originally from Baguio, Windy grew up in the center of the région parisienne (Paris Region) until she was thirteen years old. Her love for food came naturally on account of her mother being a self-taught chef.

Before venturing into cooking, however, Windy was working with human resources for organisation giants such as the United Nations and the World Health in Geneva, where she met her husband Sebastien Gygli, who also happens to be a cook and an avid foodie. ​“The things I do for love.”

It did not take a while for her to end her job and chase after her passion. Windy enrolled herself into a culinary school in Marseille, France back in 2011, and earned a French national culinary diploma after finishing what was supposed to be a four-year course in a span of twelve months. She moved back to Geneva after acquiring her credentials.

Around June 2013, the couple decided to move to Cebu City and opened Café de Genève (pronounced shuh-neff) five months after in a quiet residential area in Mabolo. The ambience that embraces the walls of this wonderful and charming little café is authentic and extremely comforting. Windy, together with her husband Sebastian, thought long and hard when it came to constructing the menu. Their goal was to serve the wonderful dishes the Swiss cuisine had to offer without depriving their customers with familiar flavours. They certainly did not fail in that area.

If you want to check out their amazing dishes and have an undying love for cheese, check out what Café de Genève has to offer: www.y101fm.com/features/lifestyle/cebu-s-best/7779-cafe-de-geneve