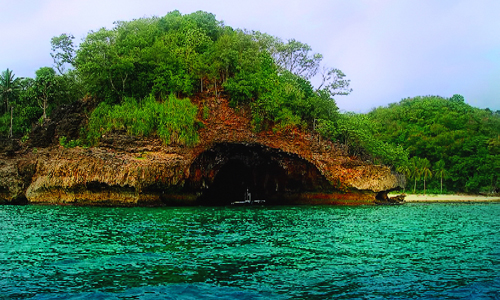 Among the caves we know, the Ubong Caves are somehow underrated that is why I am writing about them.

many people are discouraged when they know that it is very far away from the city however I suggest you take the risk and head there as soon as possible.

The Ubong caves are three different caves- two of them having a dry entrance and one accessible only from the sea. The dry entrance is easy to visit however it is dark inside and bringing a flashlight proves to be helpful. Sad thing is that the easy (dry) entrances are not taken care by most of the poeple- you will see vandals and some damages.

There is one cave with a dry entrance too however it is different from the one I talked about earlier. This cave has a big opening and a staircase leading to a grotto.

The cave which you have to enter from the sea is different from the rest- it is only accessible via fishing boats or by swimming. Just make sure that you are a good swimmer if you decide to swim since there are sharp rocks and can potentially injure you.

Did you know that the Ubong Cave is where the hero of World War II, the late Major Jesus Villamor,  landed  while bringing firearms intended for the Philippine guerillas aboard the US Navy Submarine Gudgeon way back in 1942? From there,  he has also established the first radio contact with General Douglas McArthur who was based in Australia at that time. (Source: wikipedia)

This is not only about the caves and its amazing history. By the time  you reach there and swim the waters, you will notice that there are a lot of wild life- salt water fishes, turtles and even dolphins if you are lucky!

The caves are located in Hinoba-an, Negros Occidental. The good thing about this place is that you can still see animals which are endangered such as spotted deers, wild cats and the like. The people of the place did a good job preserving them.

How to get to Hinoba-an?

From Bacolod City, Hinoba-an is about five and a half hours to six hours via public utility vehicles through the main highways. If you have a private car, the trip will last for about 3 hours. There are buses available at the Bacolod South Terminal.

Exploring outside the box, Beyond Cebu.