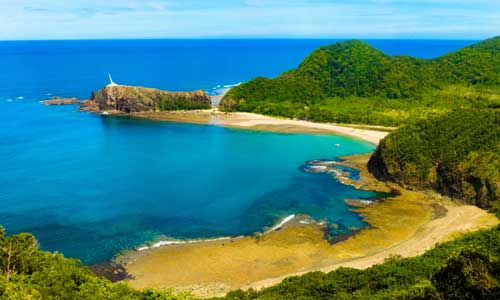 The province of Aurora was named after the wife of President Manuel Quezon.

I bet we all wish that one day, something will be named after us… that would be totally cool! Baler is known for having big waves and is usually invaded by surfers from different places of the world. The town is also jam-packed with history as well.

When you visit Aurora, do not miss the chance to go to some of the historical landmarks and pristine beaches that settles in this beautiful town.

If you are one of “cooool duuudes” that run around the beach with surf boards, do visit the Sabang Beach for a great time of surfing and also surfing lessons for those rookie surfers. September and March is actually the best month to surf around the waters.

The Baler lighthouse and Dicasalarin Beach is to be found in the Dicasalarin Cove. From the Costa Pacifica, where you can get passes to enter the cove, expect to arrive your destination after a 30 – 40 minute trip. The way is very steep and narrow that can only accommodate one vehicle.

The Baler 400 Years Monument signifies the never-ending rise of the town from its humble commencement. The town is rich in history and culture and a developing model for rural growth. Each pillar embodies a hundred years, thus a total of 400 years. The kayumanggi race of Baler was enriched by its Spanish heritage.

Baler, Aurora is somewhat unfamiliar to some people. This town is truly a must-visit place to all Filipinos and tourists because you will get to broaden your knowledge on history. It is located 200 kilometers northeast of Manila.

Think outside the box, Beyond Cebu.