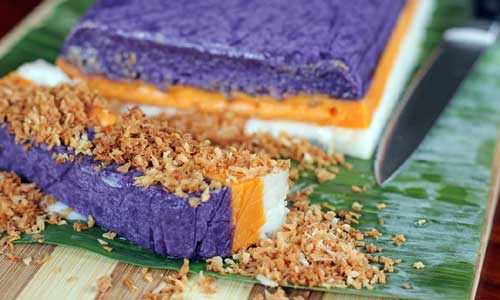 It was recognized as a place that was rich with tambo (grass). The city became known for their labong, edible bamboo shoots commonly prepared as atchara, adobo, with coconut milk, or stir-fry. Malabon has opened itself for tourists who wants to experience a different feel of the city life.

The fascinating thing in Malabon is that almost all the heritage houses are still vacated by their owners. The pride of Malabon when it comes to art is the Cacnio family's work. Popular painter Angel Cacnio's works won prizes in many competitions. He also designed the 20-peso and 100-peso bills that are still in circulation.

Last year (2014), the San Bartolome Church celebrated its 400th year. The complex design of the facade and interior is a must-see for those who are huge fans on architectural design.

You should not leave the city of Malabon without taking home Sapin-Sapin from Aling Dolor's Kakanin.

The first thing you would notice are the bright colors that makes it look irresistibly yummy, but when you chew on the soft layered glutinous rice, you would beg to eat some more!

Explore outside the box, Beyond Cebu!