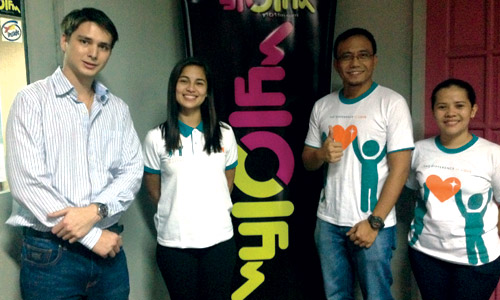 While other young stars are busy with their teleseryes, this starlet is busy helping make the world a better place.

Last week, we had the chance to snag an interview together with actress Jasmine Curtis-Smith as she shares with us how it’s like working with World Vision. To give you a background on the organization, it’s basically the world's largest international children's charity. According to their website, “For 56 years in the Philippines, we bring everyday hope to thousands of children in the hardest places of rural and urban poor areas as a sign of God's unconditional love.”

Prior to officially joining Curtis was already active with lending a hand at World Vision Australia. She started out when her cousin asked her to join the organization’s 40-hour Famine- a fund raising event that provides help to reduce hunger and malnutrition. This has transformed the lives of many children, families and communities around the world. So by the time World Vision approached her to become one of their celebrity ambassadors back in 2011, it was pretty much easy for her to say yes and the rest was history. Aside from the 40-hour and 12-hour Famine Charity events, Jasmine has also participated in various fund-raising events out and about. Currently, the organization has around 18 thousand supporters which are mostly women and the youth. World Vision is also currently supported by over 70 local celebrities such as Lea Salonga, Tintin Babao, and sister Anne Curtis.

For those that don’t know, World Vision is focused on four advocacies which are namely Functional Literacy, Economic Development, Health and Nutrition and Disaster Preparedness. Functional literacy was emphasized because the organization wants children and their parents to fully grasp the culture of reading. Health and Nutrition is also paramount due to the country’s increasing rate of tuberculosis and HIV positive victims around the Philippines.