We Will Never Surrender

As I write this, island of Fiji is still reeling from the effects of a recent super typhoon.

This island will take years to recover. These super typhoons and climate calamities that have affected the weather patterns globally will continue their carnage. 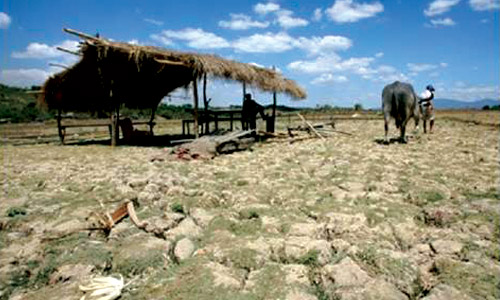 We are among those that were gravely affected by the effects of climate change, too. We will experience more Yolanda and even stronger super typhoons. Imagine the scenario affecting many other small island-states and those living along the coast. They will perish because nature's wrath show NO MERCY!

As I put my thoughts in writing, those in the Northern Hemisphere are experiencing Arctic blast and freezing weather. Worse, the variance and the temperature changes that they are experiencing are too far apart.

Meanwhile, in Asia, the unwanted phenomenon called El Niño continues its destruction. Tropical fruits and flowers are sprouting out too prematurely way ahead of their growth cycle. Although barely noticed, this is not a good sign. It validates an ongoing imbalance in our ecosystem. This will eventually destroy communities and agriculture. Unresolved, it can destroy a civilization!

Such destruction, once massive, can humble even developed countries like Japan, the United States, and Europe.

While taking up my Masters in Boston (Class of 1982), they used to say that 'if you don't like the weather, just wait a while'. It was true, after all. Boston was experiencing temperatures of below 28 °C and then normalize to a pleasant 10 °C. The weather then changed from warm to a pleasant, cool chill. All you needed was a pullover and scarf and yes, rubber totes to beat the freezing winter season.

Today, the temperature changes by a big variance and big swings! It not even as pleasant as it used to be. Much that I love Boston, I worry about it and the rest of the world, specifically those that are vulnerable and don't have the facilities to adapt to abrupt changes.

Moreover, it is of grave concern to consider the poor, the starving and the sick. Over 2 billion people have no access to clean water and sanitation. Over 3 billion still rely on the resources of the seas.

CNN recently reported that Canada is selling 'bottled AIR' to heavily-polluted China. If that news does not cause an alarm to everyone, something must be wrong somewhere.

It saddens me that with all the destruction that has happened in the past COP 21(Conference of Parties) in Paris, nothing concrete enough was done to combat climate change. The greed and the business-as-usual attitude continues to dwell in the hearts and minds of many, especially the rich and the powerful transnational corporations!

Despite the historic calls from China and the United States, those calls for a good and binding accord by Pope Francis and Presidents Obama, Holland and many others are all in vain. They were too engrossed in just cheering themselves, as if it were a political play by Disney.

It is with high hopes that with the forthcoming visit of former U.S. Vice-President Al Gore, his presence will be more meaningful to our leaders. Gore's presence this March 2016 is very important to all of us.

We hope that there will come out an accord that will make the Philippines lead the way in the fight against climate change. We pray that it will produce the required greenhouse gases (GHG) emissions and restore carbon dioxide back to 350ppm needed to sustain life in our planet.

In the meantime, we will continue what we have always been doing, protecting our forest and planting mangroves everywhere. We are proud of the mangrove forest we have retained for seven (7) generations that we fought hard to have them preserved. We are happy to have volunteers helping plant thousands of mangrove propagules and fruit-bearing trees almost every month in Negros Occidental, so with staff and volunteers planting trees in the barren mountains of Mindanao. More than ever, we are proud to be able to say what we need to do, to right what is wrong in our environment.

We call on the leaders and the corporations that pollute to stop their abuses and carnage! We are committed to do what we deem fit to save our common home and protect God's creations without fear and hesitation.

May our numbers grow to win this war against climate change and destruction. This we vow until the end of our days.

Let this not only our battle cry but yours, as well: We will never surrender!