I GRIEVE FOR THE DEATH OF OUR PLANET 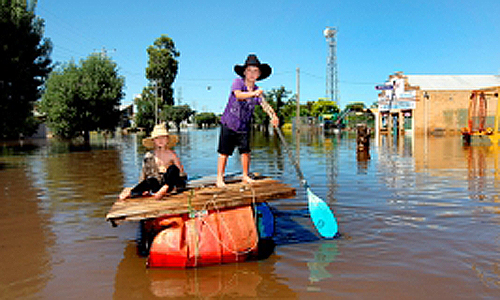 AS I write this, I can only grieve for the victims of the recent Air Asia Flight 8501 that crashed flying over a storm during a period when storms are not supposed to be affecting us.

I grieve for the missing Malaysian airlines MH370 which as of today has not even been found.

Life was created to be lived and man was supposed to make life a better place to live for all. The private sector and government were supposed to go on sustainable development and reach the Millennium Development Goals -- to supply the over 2 billion people without access to water and sanitation, to eradicate poverty and stop the destruction of our biodiversity.

Sadly, nothing has been done and planet Earth continues to be treated like a giant waste basket. Filled with dirty air and water. A point in time will come when we will not have water to drink as well as clean air to breathe.

We are not alone in this struggle. We are all victims of climatic changes and new diseases. Even the polluters and the extractive industries and those that are still in the fossil fuel mode. A time when oil has reached its lowest price and producing it at a loss. I am amazed how the planet has changed. Most of our forests have been felled and our mountains are balding. Our rivers have gone dry and our oceans are dying of acidification.

We are aghast at what is happening and blame world leaders who have failed us as well as the polluters who continue their carnage.

They must face justice. We know there is a process but the process has just legitimized the destruction of our beloved planet.

The rise of Ebola and now the H7A9 virus and many more diseases to follow is no joke nor laughing matter.

The poor are getting poorer and yes food from the wild is almost extinct.

We have warned of peak oil, peak food and water -- yet nothing happens; We have marched on the streets; yes, the climate change marches have been magnified by the echoes of the dead and the living.

We demand climate justice and the pursuit of a better life. A life ecologically balanced. We are not in favor of geo-engineering nor looking for new colonies in space to live in.

We love our planet and want to save her as well as our civilization.

The development model must change and we are demanding change for a better Life.

I grieve for all those who will continue to die uselessly and frankly we really don’t care if new species are discovered as we know that many species that have not been discovered have already gone extinct.

The planet is reaching the turning point. The threshold is close at hand. We the citizens of the Earth demand a good and safe life.

We cannot blame every crash on bad weather in this day and age. With GPS and smart phones, we cannot even save our ecosystems.

Its been a bad year for the environment with Lima stamping the death warrant.

The next COP 21 in Paris will do nothing as the threshold of 400ppm of carbon dioxide has been breached.

It is time to stop the politics of destruction and narrow economics and reclaim the global commons from the rich TNC.

It’s time to go renewable and walk our talk.

Let the New Year bring out a new way of thinking.

And yes, I will continue to grieve and do our part to help the poor and the sick.

May our numbers grow.