The Lies and The Climate Change Talks 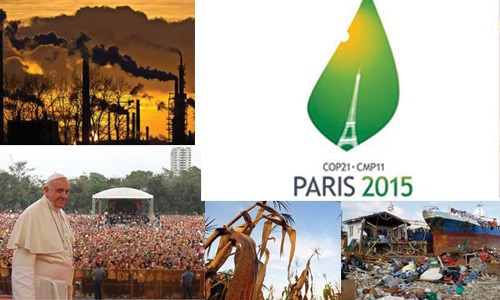 AS I write this, the Chief Executive Officers and Presidents of the oil, gas and energy companies have gathered in Paris ahead of the COP 21 climate change talks.

They announced their role in mitigating emissions and not to make temperatures reach the 2 degree centigrade rise that is the threshold limit which will kill and destroy our civilization and destroy our planet.

The scandal that has plagued Volkswagen which has shaken up the auto industry gives doubt to the private sector’s words and deeds. They are polluting more than stated and are affecting global warming. They are polluting four or five times the standards.

Who are we to believe?

Whatever happens, there seems to be no sincerity as the polluters continue to lie and be silent on the amount of pollutions they emit. The lust for power and money seems to be embedded in their heads. And now, a new global problem has surfaced – the matter of the influx of refugees from war torn Syria. There is no stopping them as they seek peace and shelter from war.

Just two days ago, a woman politician from Germany was stabbed in the neck for supporting refugees. I pray she will survive. This Global problem has grown and many millions of refugees are seeking for a new home of peace. It is for this reason that our common home, planet Earth, must be saved.

While the meetings are going on, two super typhoons are heading directly to the Philippines. The first has hit Luzon with over a meter of rain. It is an EL NIÑO year and this is only the beginning. The effects of EL NIÑO are forecast to hit hardest this December and last until April. Theses typhoons and the current water rationing going on in Manila are strange. One day, our dams are empty and another day, we are awash with water. Our food security, our water security, our people and country will be devastated.

At the other side of the world, drought has affected many states in the US and the heat has manifested itself. Rationing of water in California has gone from bad to worse. In Europe, the fall weather has turned into an early winter. Temperatures have gone down and winter has come early.

The entire climatic cycle has been distorted. No one can truly forecast and longer. The COP 21 has to make an agreement that is binding and with reduction in emission substantially high.

We need to sequester atmospheric carbon dioxide and restore it to 350 ppm. It has already breached over 400 ppm and rising. The effects are devastating.

The calls for action by Pope Francis’ encyclical Laudato Si must be enforced. The words and pronouncements by China and the United States must be stronger.

I pray that we will have a good and binding agreement in Paris. I pray that the Popes’ encyclical will enter the hearts and minds of the COP 21 leaders. I pray that hopes to protect our common home will be realized. But sadly, I know that there will be more greed and lust for power. More lies and lack of transparency. And nothing substantial will come out of Paris. We cannot afford to watch them lie and gain nothing in Paris. The COP 21 must act and walk their talk.

We have NO MORE TIME.
We must win this battle.