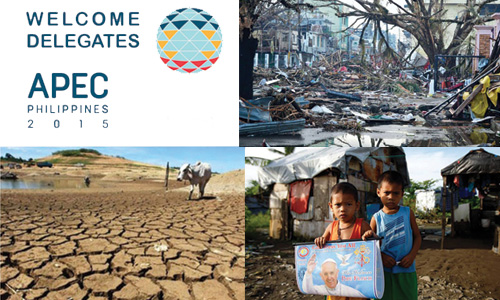 It would be important in the APEC Summit this month that the parties discuss peace, trade, wellness and the environment aside from mutual defense and the respect and integrity of each country and respect for their culture.

Whether it be culture or creed. The respect and recognition of the regions indigenous peoples. Like our very own Lumads, Ifugaos, Badjaos, Ibalois and the many who stay in their mountain homes and seek only recognition and peace.
The APEC agenda must put forth a strong push on global warming and climate change as well as ecological security.

Peace must be attained. It may be the most important matter to discuss good ecological balance and social and health issue. Food security and a balanced ecology are primordial.

Already we are facing tensions for war, poverty is increasing. Water is being rationed and the old development model is still in force. We must know our comparative advantages, protect and share them. We must eradicate poverty and have peace. Corruption must stop.

Consider that the coral triangle in Southeast Asia -- the Philippines being the center and spreads to Indonesia -- is the site of richest coral reefs in the world. Over seventy five percent of all coral reefs are found here. The Asia Pacific Region exports over forty eight percent of all global fish catch and yes, we are running out.

Over eighty five million tons of fish are consumed yearly. This is a lot of fish and marine protein. More are needed to feed the world. The illegal trade and the destructive fishing methods like Blast fishing and Moro-Ami and Kayayas as well as massive trawl fishing destroy everything especially the coral colonies, the beginning of the food chain. Keep in mind we are a country so rich. Our biodiversity is in danger, with a coastline longer than the continental United States. We can support our people with food and livelihood. Our coral reefs are the most diverse.

It may be of concern and issue during the upcoming APEC summit -- that we have the fish and the forest. And we need to protect them. They not only supply us with food and water but Life and they sequester atmospheric carbon dioxide.

There must be respect for the environment and illegal trade and practices must be stopped. The Indonesian fires that continue to burn due to the destruction of their peak forest to make way for palm plantations must be stopped. The fires have haze and covered the Countries of Malaysia and Singapore and have reached our shores. This has been happening yearly and mind you it is an El Niño year.

The taking over by China of our Spratly islands must cease. These are our islands and always have been. In a resolution filed by us during the World Conservation Congress in Amman, Jordan in 2000 we agreed to cooperate and try to make it into an international marine sanctuary. This would have benefited APEC and all of Asia with the only international Peace Park. During the study, it was recorded that the Kalayaan Island Group supplied Manila with over twenty five percent of our fish/protein need.

Let’s face it people. Our oceans are acidifying. We continue to pollute. Ballast water is emptied in our seas and dead zones and gyres are expanding. It was stated that the oceans now contain only half the fish they used to have. I believe it’s more as regeneration cannot take place.

Blue fish Tuna, Pacific cod and sole and many species are going extinct. Fish catch is smaller and lower.

The global commons must be protected. Climate change must be fought and won. Climate change is a global war that we must win. Peace in the agenda is critical as important as ecological balance. Poverty eradication, improved education and respect for one another can unite APEC into a sustainable region that can save the planet.

We pray that these concerns are discussed. There will be street manifestations and that is good as the voices of democracy are heard. Let us learn from history, from our shortcomings and make this a better world.

Who cares about the glory?

APEC’s goal should be to protect our common home and people.